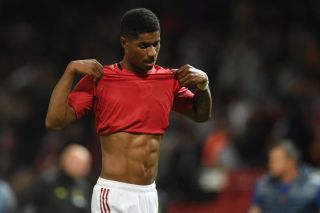 Marcus Rashford insists Manchester United’s main focus should be ending the wait for silverware at Old Trafford this season.

A top-four Premier League finish would not be enough, according to Rashford, who has set his sights on more trophies.

Ole Gunnar Solskjaer’s side missed out on Champions League qualification last season and it already looks like a tough ask with the Red Devils currently positioned in seventh and nine points adrift of fourth-place Man City.

It’s been our worst start to a league season in 33 years, managing just four wins from 12 outings, and if this continues throughout the festive period we’ll be out of the race for a top four finish by the New Year.

However, there was an improvement in results and performances prior to the international break as United secured six points from a possible nine but United have lots of work to do to bridge the gap to City.

Rashford insists getting back into the Champions League wouldn’t be enough. The England striker wants to win more trophies at Old Trafford.

“I think it’s been 18 months since we won our last trophy so it’s been a while,” he told Sky Sports. “If we come out of this season in the top four but without a trophy, I wouldn’t be happy.

“If we manage to get some trophies and get ourselves into the top four then, of course, it has been a successful season.

“For me, it is just about putting markers down for what we can do in the future because we know that this period is not going to change overnight, Ole’s not going to get what he wants overnight.

“We have to bide our time and just be patient, as long as we keep working hard and believe in what we are doing — which I think the team do 100 per cent — then I think we will be fine.”

Next up for United is a trip to Bramall Lane on Sunday. Sheffield United will be waiting to cause an upset which they are more than capable of…

It’s important now that we go on a run in the league to gain more ground on the top four.

I expect United to be there or thereabouts by the New Year.