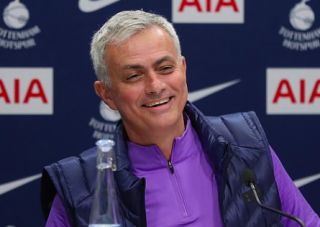 Jose Mourinho has revealed that he received 50 messages from Manchester United’s players, staff and board after being announced as Tottenham manager.

The Portuguese tactician replaced Mauricio Pochettino, who spent five and a half years at Spurs before being relieved of his duties this week.

He had been out of work since being sacked by United last December following a poor run of results.

In his first Spurs press conference, Mourinho revealed he had received messages from support from his former staff at Old Trafford.

“Yesterday I received 50 messages from United, the players, staff, the board and that means the world,” he said, as quoted by Manchester Evening News.

“That is about the respect people have for you.

“Manchester United occupied my heart even with things I did not enjoy too much. But I loved so many things there, the fans, the people that worked at the club.“

Mourinho is still adored by much of the United faithful and he is still very popular within the club. His spell in charge of the Reds unfortunately didn’t work out but he is a serial winner and still provided us with some unforgettable moments.

Spurs Chairman Daniel Levy has taken a gamble in appointing Mourinho, but will hope his winning mentality can finally help Tottenham win some silverware.

The squad Mourinho has inherited is far superior to the one left by Louis van Gaal and United, and we expect an upturn in results upon his arrival.

Mourinho makes his return to Old Trafford in the Tottenham dugout on December 4th on what promises to be a fascinating encounter.