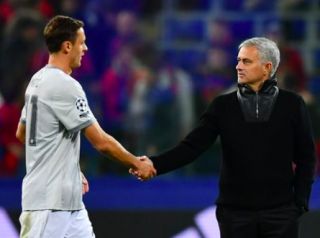 Matic has fallen out of favour under Ole Gunnar Solskjaer this season; the United boss has preferred Scott McTominay and Andreas Pereira in midfield.

Newly appointed Spurs boss Jose Mourinho shares an excellent relationship with the Serbian international, having worked with him at Chelsea before their reunion at United.

Matic even asked if he could name a new football complex in Serbia after Mourinho.

And the Independent reports that the defensive midfielder has already been name-checked by Mourinho to Tottenham chairman Daniel Levy.

At 31, Matic is reaching the twilight of his career and will want to ensure he can play regular first-team football. He was a mainstay in the United side under Mourinho and a switch to Tottenham with a manager that favours him could prove desirable.

Matic is back in training this week after an injury layoff, and could return against Sheffield United on Sunday with McTominay an injury doubt.