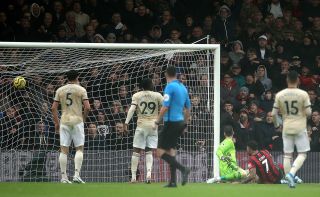 Manchester United’s short win streak is over following a loss away to Bournemouth on Saturday. The Red Devils looked to be in a good groove after advancing to the quarter-final stage of the Carabao Cup by beating Chelsea 2-1 in midweek, but they’ve failed to build on the momentum and have now matched an unwanted record.

The 1-0 loss to the Cherries on the weekend leaves the side without a clean sheet in their last 11 away games in the Premier League, their longest run since they were unable to keep a single one in 11 games between August 2002 and January 2003.

Marcus Rashford was the star of the show against Chelsea on Wednesday yet the young striker had a tepid outing at Dean Court on the weekend, with Anthony Martial also failing to make an impact for Ole Gunnar Solskjaer’s side on the day.

Josh King’s goal proved to be all Bournemouth needed to snatch the three points and it sees them move up to sixth place in the league standings, with United occupying the ninth spot. The forward sent his side ahead just before halftime, controlling a cross whipped in by Adam Smith and then flicking the ball over former Crystal Palace man Aaron Wan-Bissaka before smashing it past David de Gea.

The Cherries frontman put an end to a Bournemouth drought that had left them without a single top-flight goal in 50 attempts and 358 minutes.

United, meanwhile, will be hoping that they don’t break the record with another failure to keep a clean sheet when they face Sheffield United in their next away fixture on November 24. They will play host to Brighton & Hove Albion at Old Trafford next weekend before heading to Bramall Lane.

Looking ahead to that fixture versus Brighton, Bet365 have the Red Devils to win at 11/20 with the away side at 11/2, they’re also offering 14/5 odds on a draw. It would serve fans well if they’d check oddsmanager.co.uk for betting tips on football before placing any bets on the weekend’s upcoming games, though. You could find odds of 1/1 on both teams scoring if you head to William Hill, who also have 8/11 odds on it not occurring.

For the long view, United are certainly not though to have any chance of winning the Premier League title but you could take Betfair up on their offer of 500/1 odds. The Old Trafford outfit is still considered to have a shot at the top four but aren’t among the favourites at 3/1 with Paddy Power. Of course, you’d have way better luck going with the latter but you could also play it safer with a 4/5 bet from Betfred.