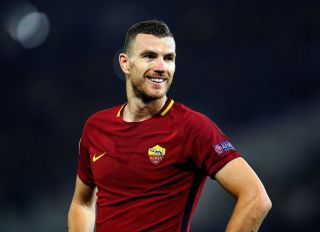 Manchester United are considering a January move for AS Roma striker Eden Dzeko, according to ESPN.

It is noted that the club is searching for experienced reinforcements to add to the squad’s attacking options.

Solskjaer should have known that before the transfer window closed last summer. After selling Romelu Lukaku and allowed Alexis Sanchez to go out on loan, United were left with Anthony Martial, Marcus Rashford and Mason Greenwood.

All three players have unbelievable potential but it was a big ask for all to take that responsibility this season, especially when neither Martial or Rashford have scored a total of 20 goals or more throughout a campaign to date.

While Solskjaer has gone on record earlier this month to state that United will only make signings in the winter if they can offer long-term solutions at Old Trafford, ESPN claim Solskjaer is looking for a proven goalscorer in the transfer market.

Signing the Croatian would make little sense as a short-term buy because he’s not played a minute of football all season. His potential arrival in January would be met with excuses about how it will take him time to get with the pace of the Premier League.

Dzeko and Mandzukic are both 33-years-old but at least the Roma striker has played this season, scoring six goals in 15 appearances so far.