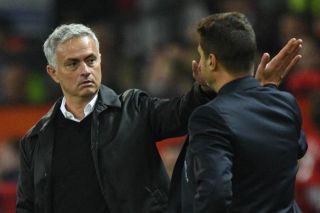 Tottenham Hotspur have announced the appointment of José Mourinho as their new manager, following the sacking on Tuesday of Mauricio Pochettino.

We’ve already asked the big question. What should Manchester United do now considering Pochettino was strongly linked with the job at Old Trafford a year ago? Ole Gunnar Solskjaer does not appear as good a manager as the Argentine but his United side has seen an upturn in results lately and getting rid of a club legend in these circumstances would be disrespectful.

Spurs have gone for ex-United boss Mourinho, who has a long list of previous clubs including FC Porto, Inter Milan, Chelsea and Real Madrid.

“I am exciting to be joining a club with such a great heritage and such passionate supporters,” said Mourinho in a statement released by Spurs. “The quality in both the squad and the academy excites me. Working with these players is what has attracted me.”

Daniel Levy, the chairman of the club, said: “In José we have one of the most successful managers in football. He has a wealth of experience, can inspire teams and is a great tactician. He has won honours at every club he has coached. We believe he will bring energy and belief to the dressing room.”

United fans have been reacting to the news which sees their former manager takeover at White Hart Lane.

As a Manchester United fan, I couldn’t care less about what happens at Spurs as long as if doesn’t negatively affect United

However, as a fan of what Jose Mourinho has done for United and for football, I hope he proves everyone wrong and shows why he’s the Special One #GoodLuck pic.twitter.com/GqLnEqgynb

Jose Mourinho’s commitment to upsetting Chelsea fans is by far his most attractive quality.

I hope Jose Mourinho fails magnificently at Spurs but that’s nothing to do with the man himself — he’s just managing a top 4 contender, is all.#mufc fans should [selfishly] want as little competition as possible for UCL football regardless of managerial or player personnel. https://t.co/gedKxa4I4M

Mourinho going to spurs hurts like what I imagine an ex girlfriend getting with that bloke you don’t like from the office.#MUFC

Which hotel will Jose Mourinho be moving to?

Poch out, Jose Mourinho in. Netflix yet to create anything with as much drama as an average Premier League season.

4th of December we welcome Tottenham at Od Trafford with Jose Mourinho as their manager. Interesting.

What a glorious morning… not. 😭 naturally, I can’t wish him well at Spurs… but I’m an adult now so just as you would with an ex, wish you all the best Mourinho. 🙃 💛 https://t.co/NDMEhmLaIa

This is the same man who was sacked by United last December following a poor run of results and has been out of work since, unless you count the couple of gigs he did for Sky Sports this season.

Pochettino lasted five-and-a-half years at Spurs and last season was their peak. He didn’t get enough time to turn things around but there are plenty of reports linking him to bigger jobs already.

“Mourinho is an absolute winner. 🏆

“It will be interesting to see how the players at Tottenham handle it.” 🤷‍♂️

“Make no mistake, Jose and Pochettino are completely different characters.”

Ally McCoist is concerned how the #THFC squad will react to Mourinho. ⚪️ pic.twitter.com/XCXuAfiXib