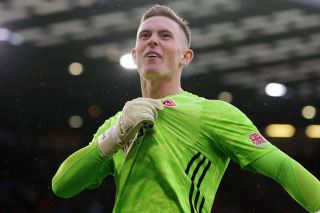 Dean Henderson is reportedly on Bayern Munich’s radar as a potential long-term successor to Manuel Neuer, even though he signed a new Manchester United contract in June before being loaned out to Sheffield United.

That’s according to Adrian Kajumba of the Daily Mail, who adds that Bayern Munich are looking at young Premier League talent to improve, including Tottenham Hotspur striker and Republic of Ireland international Troy Parrott.

Neuer, 33, hasn’t been at his best in recent years but surely this is a sign United should be looking at Henderson the same way — as David de Gea’s replacement down the line?

The Bundesliga champions will probably have to replace Neuer before United are face with that dilemma (De Gea is 29-years-old) and Henderson might not have the time to wait around for the Spaniard’s days at United to end.

Henderson has shown great form in between the posts for Chris Wilder’s side this season, though replacing the Germany No.1 would be huge responsibility.

Neuer is still widely regarded as one of the best keepers in the world and he has largely reinvented the role in the modern era as a “sweeper-keeper”, regularly charging out of his box to snuff out opposition attacks before they fully develop.

But Henderson’s performances this season for the newly-promoted Premier League side deserve recognition from the best. The Blades are not known as a team that sits back and parks the bus; instead, they play the ball forward and rely heavily on their defensive backline and goalie to control opposition counters.

They’ve been a credit defensively which obviously helps Henderson, conceding just nine Premier League goals — the second-fewest in the top-flight after 12 games, with Leicester City the only club to have allowed fewer.

A lot comes down to the belief they have in Henderson. That allows the Blades to play attacking football, even when facing the top six, so you can see why Bayern would be interested.

Manchester United travel to Sheffield United on Sunday but Henderson is unable to play against his parent club.