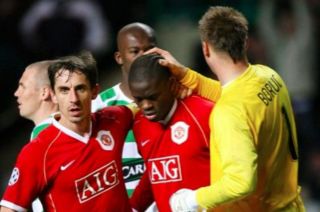 Louis Saha has revealed that teammate Gary Neville predicted he’d miss a penalty against Celtic in the Champions League.

The French striker had an opportunity to score an equaliser late on at Celtic Park, but had his spot kick saved by Artur Boruc.

Celtic eventually won the game 1-0 to ensure Champions League knockout stage qualification on a famous night in Glasgow in 2006.

Shunsuke Nakamura scored an incredible free-kick on one of Celtic’ best nights in their history.

Some will forget the golden opportunity Sir Alex Ferguson’s side squandered to equalise, however.

Saha, who scored 42 goals for United, said he was left most angry with Gary Neville after his penalty miss.

“The worst memory about it is that my own team-mate, Gary Neville, actually predicted I’d miss the penalty,” he told FourFourTwo.

“He said that to someone, then I read it in a newspaper – I was fuming!

“But with Gary, we argued a lot, so no change there.

“It’s about how you react, and the following weekend I scored against Chelsea, one of the best goals I scored in my career.”

United went on to win the Champions League in 2008, but Saha unfortunately was not selected in the squad for the final and subsequently left to join Everton.