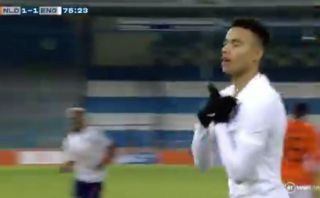 England U-21s suffered a 2-1 defeat at the hands of the Netherlands in a friendly.

A brilliant injury-time free-kick by Javairo Dilrosum was the killer blow for the Young Lions.

Manchester United striker Mason Greenwood’s first goal for England U-21s drew the scoreline level after coming on as a substitute.

A fantastic long ball by Man City’s Phil Foden found Greenwood over the top and after some poor defending and goalkeeping, the United starlet found the back of the net.

It’s great to see Greenwood take his opportunity in the young England side. He is still only 18 and the promise shown already by him is remarkable.

United will have some player on their hands if Greenwood can get his head down and avoid injuries.