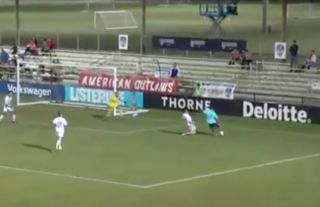 Manchester United youth player Dillon Hoogewerf has scored a stunning solo goal while on international duty for Netherlands u17.

The 16-year-old ran from his own half down the right-hand touchline before eventually squeezing the ball home from a tight-angle.

Hoogewerf’s goal halved the Netherlands deficit against the USA in an international friendly.

There is clearly huge potential in the youngster who joined United’s youth team set-up from Ajax this summer.

Hoogewerf has scored three goals and contributed two assists for Neil Ryan’s u18 side so far this season.

He is certainly one to watch out for in the coming years! Check out his goal below, thanks to @USYNT.

63′ | 🇺🇸 2 – 1⃣ 🇳🇱
Dillon Hoogewerf takes it all on his own to cut the Netherland deficit in half pic.twitter.com/WWJI9sE2ZI