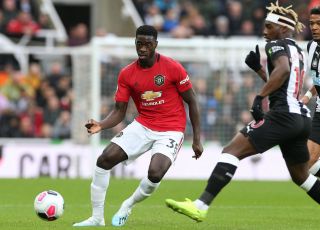 Axel Tuanzebe has got Manchester United fans excited by seemingly hinting at a return to action.

The young Englishman suffered a knock in a warm-up and had to pull out of the Liverpool fixture at the last minute.

And with Victor Lindelof not looking like the best suited partner for Harry Maguire, some supporters have called for Tuanzebe to be called up to the starting eleven, preferring to have a quicker centre back alongside the former Leicester City defender.

He enjoyed a successful season on loan with Aston Villa last year and that experience has allowed him to step up under Ole Gunnar Solskjaer. The biggest difference to his game with Lindelof is pace which is needed alongside a slow defender like Maguire.

Marcos Rojo had been used as a back-up option to Lindelof and Maguire before the international break, but it would have been a different story if Tuanzebe wasn’t out injured.

Tuanzebe took to Instagram over, writing the following caption: “Vitamin D. Now it is time to get back on the pitch!”

Solskjaer will be addressing the media on Friday morning when he is expected to give an injury update on Tuanzebe as well as Paul Pogba, Luke Shaw and Nemanja Matic.

It would be great news if we had Tuanzebe back for Sunday’s trip to Sheffield United but Lindelof and Maguire are likely to start.