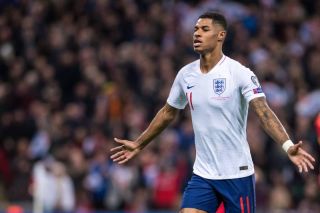 Manchester United and England forward Marcus Rashford has hit a more prolific patch of form for club and country.

The 22-year-old has suggested he’s gaining confidence following a “tough period” which raised a lot of questions about his development. Some pundits thought he was stalling when United were struggling to score goals at the beginning of the season, but he is playing much better at the moment and hopefully it’s the turning point of his career.

Rashford has scored in three consecutive England games and the United star told reporters (via Reuters) consistency is crucial for a player in his position:

“It has been a tough period, and now I’m getting consistent games and playing week in, week out. As a forward that has huge importance.

“If you are not in the team and you’re in and out, you don’t quite have that confidence in front go goal. But when you’re having a run in the team it’s important to come up with the goods, and once you start doing that it becomes second nature.”

READ MORE: Marcus Rashford reveals he has achieved his childhood ambition with note he wrote as a kid

Rashford’s amazing form of late has resulted in nine goals and one assist in his last 10 appearances for club and country. United are reaching an important part of the season over the Christmas period and Solskjaer will need all of his attackers wearing their shooting boots!

He scored in each of England’s recent UEFA Euro 2020 qualifiers against Montenegro and Kosovo.

Taking to the field in place of Chelsea winger Callum Hudson-Odoi with 30 minutes left on the clock against Kosovo, Rashford made an immediate impact.

Rashford also spoke positively of the competition for places in Gareth Southgate’s squad:

“I have been in two tournaments now and the squad is so important. With the qualities that every individual has in this team it is something we have to use to our advantage.

“People are going to be playing at different moments, but when you are on the pitch you have to do your best and try to come up with the goods. It is good competition.”

The United academy star should be part of Southgate’s plans for next years’ European Championship. Now he should be aiming to finish the season on 30 goals across all competitions, though he’s never scored more than 20 in one campaign!