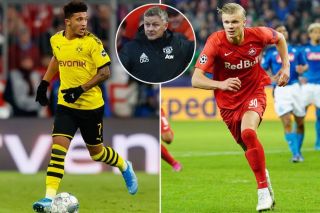 Manchester United are eyeing up two major transfers in January.

It would be some statement if United were successful in their attempts to sign both Jadon Sancho and Erling Braut Haaland midway through the season, as reported by Goal.

Apparently United believe there is a chance of securing a deal for Borussia Dortmund winger Sancho in January, with reports suggesting the England international is becoming unhappy at his current club.

Sancho was fined and dropped by manager Lucien Favre for his side’s clash with Borussia Monchengladbach in October after he returned late from international duty.

The exciting winger will have no shortage of interest if he does look for a move in January or next summer.

Former Liverpool midfielder Dietmar Hamann says the Scousers “have great interest” in the ex-Man City youngster (via the Mirror), so we can expect opportunities to arise for him in England or maybe somewhere else abroad.

The Red Devils will be hoping the potential unease between club and player will be enough to see Dortmund sanction the sale of Sancho in January, with it previously assumed that he’d stay put until the summer at least.

With Sancho determined to remain in the Champions League, wherever he goes, United could persuade the star that his arrival in January would grant Ole Gunnar Solskjaer’s men an even greater chance of qualifying for next season’s tournament.

There is also a mention for Haaland — to back up claims previously made by the Metro about the striker joining United in January but returning to Red Bull Salzburg for the remainder of the season.

Surely if United sign Haaland in January and loan him back, Solskjaer will pass on Juventus striker Mario Mandzukic to stick by Anthony Martial, Marcus Rashford and Mason Greenwood until the summer?

Both players will be expensive but they would equally transform our attack for the better.