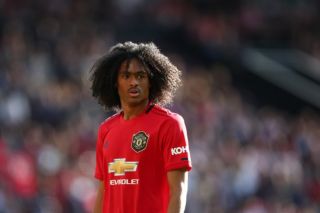 The future of Tahith Chong was thrown up in the air a few weeks ago when his agent made it clear that they would listen to interested clubs unless Manchester United made a favourable contract offer.

A separate report from Italian publication Calciomercato made for interesting reading not long ago, stating that Chong had already decided that he would not put pen to paper with the Red Devils, and that Juventus were keen to sign him on a free transfer at the end of the season.

However, the Metro claims United have offered Chong a new £25,000-a-week deal and they are hopeful the offer will persuade him to reject interest coming from Juve.

Chong has made four first-team appearances this season (all of which have come in the Carabao Cup and Europa League) but is yet to score. You can see he has talent but is probably in need of a loan move abroad to gain some experience.

The Dutch kid also needs to grow if he’s to make it in the Premier League. He has been pushed off the ball far too easily at times this season and doesn’t look ready for the United first team.

Chong will be pushed further down the pecking order when Ole Gunnar Solskjaer signs another striker or creative player, so he really should look for a loan move in January — if he’s planning to stay at Old Trafford.

Any talk of him joining Juventus on a free and replicating what Paul Pogba did in Turin is bizarrely premature. While he’s good, Pogba was a lot better at his age.