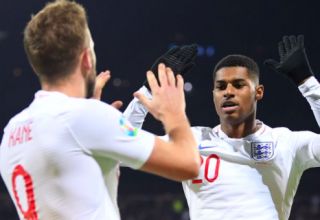 Alan Shearer has named his preferred England side for next summer’s European Championships.

Maguire is England’s best centre-back so there is no doubt that the 26-year-old will be selected if available come next summer.

Since making his world record move from Leicester City, Maguire has settled into life at Old Trafford well and has began to captain the Reds in Ashley Young’s absence.

Rashford, meanwhile, has had a mixed start to the season but is back firing after scoring four goals in his last four games for club and country. When betting on Euro 2021 he might be a good shout for top goalscorer.

He is often criticised for not being clinical in front of goal, but his latest strike for the Three Lions against Kosovo on Sunday was a fantastic precise finish.

Ole Gunnar Solskjaer has been using Rashford out wide upon Anthony Martial’s return from injury and the youngster looks far more comfortable coming inside from the left-channel.

However, Rashford cannot afford to become complacent if he is to maintain his place in Southgate’s side for the tournament with a wealth of exciting options fighting for their place.

Chelsea’s Callum Hudson Odoi and Borussia Dortmund’s Jadon Sancho will be vying for a spot in the front three, most likely  alongside Harry Kane and Raheem Sterling.