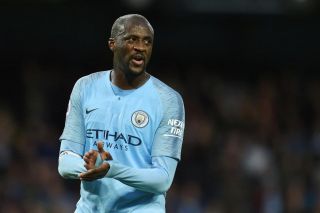 Former Barcelona and Man City midfielder Yaya Toure has played with and against some of the best players in the world.

In his three years at Barcelona and eight at City, the 36-year-old is bound to have some stories to tell about the battles he faced on the pitch.

It’s a surprise Manchester United man who tops his list when it comes to choosing his toughest opponent.

Asked by The Times who his most difficult opponent was, he replied: “Nemanja Matic was complicated. He’s not quick but he’s so strong, clever. All the rest of the opponents, because I always looked at them carefully before games, I get their weakness.”

Matic has fallen down the pecking order at Old Trafford this season with Ole Gunnar Solskjaer opting to start Scott McTominay instead.

As a result, Matic has been linked with a move in January to AC Milan, as per The Sun.

And I don’t think anyone at Old Trafford will lose sleep if that happens.

McTominay has become a first team regular this season and offers a lot more than the Serb, who, let’s face it, has lost the legs he had and doesn’t get around the pitch with much mobility anymore.

But when he won the league at Chelsea under José Mourinho — in 2014-15 — Matic was arguably the best midfielder in England. N’Golo Kante didn’t take long to take that claim and did so in the same team as the former Benfica star.

It’s always interesting to hear players talk about their toughest opponents and we’re very surprised that Toure has gone with Matic, especially when he would have played against the likes of Paul Scholes.