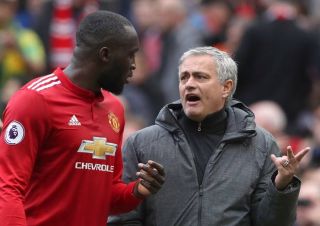 Back in the summer of 2017, the Red Devils were in the market for a proven goalscorer to take the reins from an injured and ageing Zlatan Ibrahimovic. They set their sights on Belgium international Lukaku at Goodison Park, knowing he had a good record for a young striker in the Premier League after spells at Chelsea, West Brom and Everton.

Walsh had previously worked with Mourinho at Chelsea and he supposedly tried to tell people at Old Trafford that they were taking a big-money gamble on Lukaku because he lacked the mental strength to lead the line for one of the world’s biggest clubs — which, despite leaving United since then, he continues to do with Inter Milan.

United ignored this, even though Walsh’s reputation had mounted after contributing significantly to Leicester City’s title triumph in 2013-14. He told The Athletic of Mourinho and United: “He would be the first to admit that he probably needs to reinvent himself now a little bit.

“Obviously, it didn’t go right at United. Pep Guardiola was asked in an interview with a newspaper how he accounted for his success. He said 80 per cent of it was recruitment. I think Jose may have lost sight of that fact.

“You have to work out what you want and need Don’t try to attract players with no plan: ‘He’s available so we will take him.’

“Alexis Sanchez is a good example. During the title-winning season we only lost three times but two of those were against Arsenal. They pasted us at Leicester, 5-2. We played well and Jamie scored a remarkable goal, but Sanchez was outstanding that day. He was instrumental in both games.

“But it is not about collecting players, it is about having a clear plan and a strategy of how you want to play.

“When Jose signed Romelu Lukaku from Everton, I remember saying to him, ‘You have to be careful with Lukaku. He is a big baby, you know.’ He said he could handle him.

“I don’t think he really got Lukaku on-side mentally, which you have to do. That is the case with him and Paul Pogba. They aren’t my type of players. They are more about themselves than the team. I wouldn’t have touched them. Because they are good players doesn’t mean you are going to get a good team out of it.”

While Walsh will admit watching United this season, that we lack Lukaku’s goals, but he makes a good point that we don’t miss his attitude and that’s why I believe Ole Gunnar Solskjaer sacrificed being short a striker when the club cashed in on the Inter frontman.

Now United are in the process of searching for a new striker to replace Lukaku. Someone more fitting to Solskjaer’s style of football.