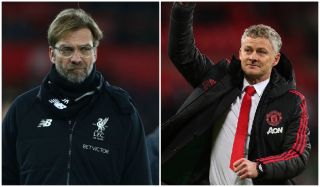 Graeme Souness has warned his former club Liverpool not to get comfortable with their recent rise to prominence because Manchester United will soon re-emerge as a title-winning force.

Liverpool are currently top of the table, eight points clear of Leicester City and Chelsea, and very much on course to win their ever Premier League title after beating champions Man City prior to the international break.

But as dominant as the Scousers seem now (United being the only team to take points from Jurgen Klopp’s side this season), former Liverpool captain Souness cannot see them winning title after title from here on.

“You can never say they will go into a period of dominance because you have to look at Manchester City — they will be around for a long time,” Souness told the Mirror.

“There’s the emergence of Chelsea’s youngsters too. Will they get better in the next few years?

“And Manchester United will be back, guaranteed. It’s just a case of when. So you can’t say Liverpool are going to dominate.

“But once you’ve won the first one, it does give you a taste to win it again. When I was there I was made to feel, ‘This is what we do – win leagues’.

“That was the number one aim on the first day of the season, the league, not the European Cup. They felt that said more about you as an individual and a team.”

United are going through a transition at the moment and nobody knows how long it will take us to get back to where we once where. Expecting to win league titles is a thing of the past and we now look to each season with objectives to finish in the top four.

It’s a sorry state for a club like Manchester United and a lot of it comes down to poor ownership, terrible recruitment and questionable management.

There’s hope now that Ole Gunnar Solskjaer has us on the right path, but Liverpool are likely to wobble once Klopp calls it a day at Anfield.

The same can be said for City and Pep Guardiola.