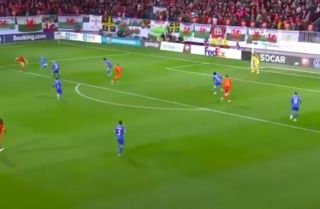 Ryan Giggs’ Wales side moved a step closer to qualification for the European Championships next summer with a convincing 2-0 victory away to Azerbaijan.

The win sets up a winner-takes-all clash with Hungary for the automatic qualification spot on Tuesday in Cardiff.

The 22-year-old cut inside and hit a curled effort inches from the top corner, but rebounded from the woodwork straight into the path of the Bournemouth forward.

Ole Gunnar Solskjaer has secured one of the bargains of the summer acquiring James from Swansea and we hope his excellent form can continue after the international break when the Reds face a tough away game against Sheffield United.

Almost an absolute wondergoal from Dan James, but it ricochets off the woodwork twice into the path of Harry Wilson who is positioned perfectly to score into the empty net!

Seriously, Dan James is great reason to be Utd and Wales fan. Grew up with a welsh magician on the wing, and now I’m seeing generation 2.0. #MUFC #AZEWAL #TogetherStronger pic.twitter.com/0p5WTXTt9C