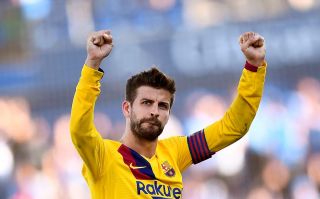 Barcelona defender Gerard Pique says his four-year spell at Manchester United made him into the player he is today.

The Spain international came to Old Trafford from Barcelona’s academy as a 17-year-old in 2004 and went on to make 23 appearances for the first team before re-joining Barça and becoming one of the best defenders in the world.

While he would have wanted to play more games for United, Pique learnt a lot from training with the likes of Paul Scholes, Ryan Giggs, Rio Ferdinand, Cristiano Ronaldo and Wayne Rooney. Not to mention being managed by Sir Alex Ferguson.

Jonny Evans stayed at the club when Pique left and was given a chance in the team as third choice behind Ferdinand and defensive partner Nemanja Vidic.

Pique says that experience at such a young age aided his development and meant he returned to Camp Nou a much better player.

“When I left my friends there to spend four years at Manchester United it was tough,” Pique told the Observer. “At the same time that was a great experience for me.

“I grew up a lot there. I am who I am because of the period I had at Manchester United, even though I didn’t play as much as I wanted to.

“But in my position there were two centre-backs who were among the top three in the world at the time [Rio Ferdinand and Nemanja Vidic]. But being at home, and having the career I have had at home, has been a great pleasure and I am very proud of it.”

Pique has an a remarkable career to date — winning 28 honours as a Barcelona player, including 8 La Liga titles 3 Champions Leagues. And for Spain he’s lifted the World Cup and European Championship but decided last year to retire from international football.

He always speaks fondly of his time at United.