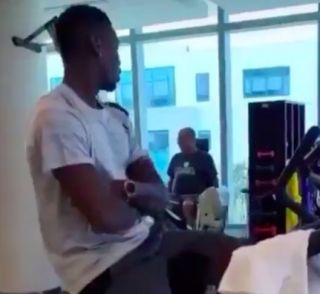 Paul Pogba has posted a series of videos on social media as he steps up his fitness regime ahead of his Manchester United return.

The Frenchman had an ankle cast removed last week and is in America undergoing a fitness camp as he looks to recover from his reoccurring injury problem.

In a series of videos, Pogba is seen on an exercise bike as well as doing stretches and completing balance related activities.

READ MORE: What Brandon Williams has been doing in training to impress Man Utd stars

Pogba has not played for United since the 1-1 draw against Arsenal at Old Trafford on September 30th, and has featured in only two of the previous 14 games for the Reds due to his recurring problem.

Solskjaer will be keen not to rush him back on this occasion as he needs his star midfielder back to full fitness ahead of a busy fixture schedule in December.

Fred and Scott McTominay have began to form a solid midfield partnership in Pogba’s absence, but the Frenchman will no doubt return to the starting eleven when he regains fitness.

Pogba may replace Fred in central midfield when he eventually returns despite the Brazilian impressing with his extended run of games, or alternatively play in an attacking midfield role currently occupied by Andreas Pereira.

Pogba working hard ahead of his return from injury 💪 pic.twitter.com/6g6OTAACMD