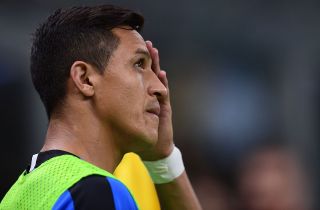 Man Utd have no intention of giving Alexis Sanchez another chance at Old Trafford mean the club is eager to offload the attacker on a permanent basis next summer, according to a report.

The Chile international left Arsenal for Manchester United in January of last year but could never replicate the form that made him a star at the Emirates.

It would be a total understatement to call Sanchez’s time at United disappointing as he’ll go down as one of the worst signings made by the club.

When he played, he offered little to nothing. His fall from grace saw a huge drop in performance levels which proved costly to the Red Devils.

Sanchez’s loan move to Inter Milan was made official late in August. So late that United never replaced the Chilean attacker or Romelu Lukaku, who also joined the Milan-based side, and Ole Gunnar Solskjaer was left with little depth in the forward department.

🥂 @Alexis_Sanchez is a Nerazzurri player! 🇨🇱⚫🔵

It now looks like United won’t stand in the way of Inter, or any club for that matter, if they want to sign Sanchez next summer.

This update comes from Adam Crafton of the Athletic — with claims United are ‘desperate’ to get Sanchez off their books.

Sanchez is currently out with an ankle injury, picked up on the previous international break playing for Chile.