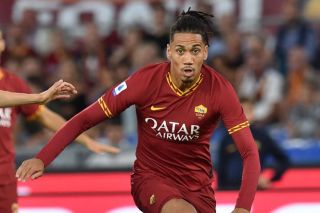 The future of Chris Smalling should become more clear in the next few days.

That’s what Il Messaggero (via Sport Witness) are reporting on Friday, with claims there will be a meeting between AS Roma and Manchester United next week to try and come to some sort of agreement.

Smalling has had a fantastic start in Serie A and Roma are not going to want to give up on the England International at the end of the season.

The former Fulham defender left Old Trafford on loan in the summer following the arrival of Harry Maguire. It was then known that he’d slipped down the pecking order and was surplus to requirements under Ole Gunnar Solskjaer.

READ MORE: Sanchez has run out of chances, United desperate to get Chile star off wage bill

Maybe the Italian game suits Smalling more than the Premier League because there’s more emphasis on defending than playing out from the back. In that case, United are better without him.

International breaks have been quiet for some time when it comes to Smalling. England manager Gareth Southgate never seemed to be a fan or he doesn’t get selected anymore with Maguire a mainstay in defence, like at United. Even Phil Jones has been known to get the nod over his ex-teammate in the past.

The Italian newspaper states that Smalling is a unique exception to the rule set by Roma of not signing any players over the age of 27. They also claim United value the player at €18m.

It is alleged that Roma already paid €3m to make the loan deal happen back in August, so they will try offer €15m in the summer to finance a deal.

Stay tuned to the Italian press over the weekend and into next week. We’ll have updates on it.