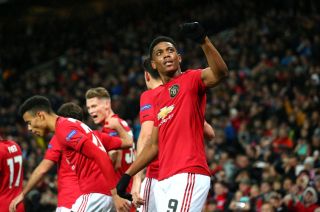 “Grabbed the assist for Pereira’s opener and Rashford’s goal. Didn’t have much of a sniff in front of goal but worked his socks off and was a constant menace in attack. United look so much more dangerous with him leading the line. Rating: 8”

This is one of the national newspaper’s assessment of how Anthony Martial performed in Sunday’s deserved 3-1 home win to Brighton. And, in all fairness, you can’t really argue with it. Manchester United look a far better team with him at centre forward than any other player at the club.

Martial links up well, he works his sock off as the assessment in the paper acknowledges and he did indeed gain an assist for United’s deflected first goal. Although a rating of 8 might be stretching it, where a 7 may reflect his performance slightly more accurately. With Martial leading the line this also pushes Marcus Rashford into his best position wide on the left where he looks so dangerous and is improving week after week, he has the potential to be world-class.

READ MORE: Marcus Rashford reveals he has achieved his childhood ambition with note he wrote as a kid

The Frenchman has switched roles with Rashford with both benefiting. He originally started as a left sided winger cutting in on his right foot and looking menacing as he did when he made his debut at Old Trafford on 12th September 2015 as a 65th-minute substitute for Juan Mata, and scored the final goal of a 3–1 win over rivals Liverpool. And his goal scoring didn’t stop there, two against Southampton and one against Ipswich made it four goals in as many games. In a total of 49 games in all competitions he scored 17 goals (11 in the Premier League). Not bad for a 20-year-old in his first season in a different country and different culture.

No I’m going to rephrase that, that’s a great first season!

But since that first season there has only been sprinkles of that promise. With no development in his game he became predictable; running at players and cutting back in off the left flank onto his right foot and just been brushed off the ball time and time again. You could see it played on his mind too as far too often he ran at players without a clear vision in his mind of what he was going to do and ended up just running straight into defenders. And inevitably those opposition counter attacks lead to chances or goals the more often possession is turned over. But as mentioned, there were sprinkles of promise. Enough to convince everyone that young Martial is the future. Seasons with eight, eleven and twelve goals respectively (in all competitions) followed his debut season. But an average of a goal every 3.6 games is below what’s needed.

Ole Gunnar Solskjaer was without doubt a top finisher. So no better man to spot the potential within a player to play in a centre forward role than Ole himself. He naturally felt at home at centre forward and had that goal scorers instinct. Although he made alot of appearances off the bench as has Martial at times, Ole averaged a goal every 2.9 games. So if Martial wants to lead the line for a successful Untied of the future he will need to improve drastically. Especially when you see Cantona, Cole, Yorke and Rooney at a goal every 2.2 games and Ruud van Nistelrooy at 1.45!

My worry is that in three seasons Anthony Martial, a professional footballer with bundles of talent and trains week in week out never learned how to dribble other than in straight lines and a high percentage of the time into welcoming defenders. Surely the coaches work on these type of improvements with players. If they do then that’s my worry for him, that he is unable to take on information and improve his game. Or maybe it’s the other way around and the coaches aren’t up to scratch? But I doubt that’s the case. Either way there has been no improvement in Martials game whatsoever since his arrival.

As a centre forward it is important to hold a high line, stay central and link up well. The staying central part is where Martial let’s the role down. Too often he is found out wide linking up with wingers only for a winger to look to cross but no-one is in the box to deliver the ball to. Centre forwards need to be in the box, sniffing out every opportunity that comes their way. Feed off the scraps of every cross, deflection and spillage. That’s where goals are scored. As I said for Ole it was natural and instinctive. I dont believe it’s the same for Martial and if at nearly 24-years of age he doesn’t address this then he wont be a Manchester United centre forward for long. The longer Manchester United have the current Anthony Martial floating about the longer they will spend outside the top four.