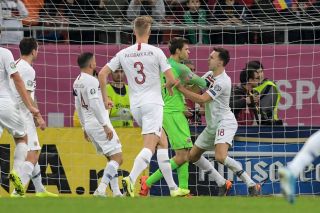 Everybody dreams of playing for Manchester United, right?

The moment I saw Gary Neville run towards the Liverpool fans at Old Trafford in celebration, I knew that was exactly what I wanted to do if I ever got the chance.

Now, I’m no longer a kid – but give me half a chance and I’ll do exactly what Nev did that day and more!

Norwegian goalkeeper Rune Jarstein may be 35-years-old but he has revealed that he still has a dream of playing for United.

He spent the majority of his career playing in Norway before moving to Bundesliga outfit Hertha Berlin in 2014. Jarstein is considered no.1 for the national team too, since Lars Lagerbäck was made manager in 2017.

With Jarstein’s contract with the Berlin based side expires in 2021, the keeper insists he still has a dream of joining the Old Trafford club, and is presumably going public in hope Ole Gunnar Solskjaer does a fellow country a favour by signing him!

We shouldn’t forget that Edwin van der Sar joined the Red Devils in his mid-30s and went on to win the European Cup in 2008 — saving that all-important penalty by Le Sulk in Moscow. The Dutchman is clearly an inspiration for Jarstein to fulfil his dream.

“I still dream about playing for Manchester United. That dream has been there for many, many years. I live in hope,” TV2 quoted him as saying, as cited by Sport Witness.

As things stand, Solskjaer has three goalkeepers to select from in the current squad: David de Gea, Sergio Romero and Lee Grant. Dean Henderson is also on loan at Sheffield United and is  impressing most weeks, so there’s no real need to sign a new goalie anytime soon.

Jarstein wouldn’t be against a backup role, as long a it allows him to fulfil his dream of joining the Premier League giants.

“Yes, of course… I’m happy to support De Gea. I’ve always had a dream of playing at United. I am allowed to dream. United are my favourite club,” he added.

“The Bundesliga is a good league, but when you get to the biggest clubs, it’s high level. It would be nice to try and see how it would have had been. However, it’s a little too high up.

“I am doing very well at Hertha Berlin, so I do not see myself playing in the Premier League.”

Talk about throwing your hat into the ring for a transfer!