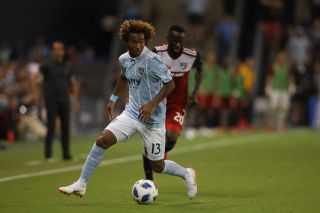 Man Utd are said to be one of a number of sides interested in Kansas City midfielder Gianluca Busio.

The only reason a director of a club would let them become public knowledge is to bump up the price of a player.

But Busio has been a breakthrough performer for Kansas City this year and enjoyed a campaign with four goals and two assists in 32 games. At 15 years and 89 days, Ghe became the second-youngest player all-time to sign an MLS contract when he joined Sporting KC in August 2017

That’s not a bad tally for a 17-year-old and it has lead to speculation over a move to Europe within the next few years. Busio is valued as £720k, as per Transfermarkt.

“He’s a great talent. He is a player who can play safely in Europe,” Burleson told TuttroMercatoWeb (via Manchester Evening News) at the annual Wyscout Forum which took place over the last two days. “He has a great technique, he is a smart player, a box to box and he works hard. For me, if he wants to be successful at high levels, he must change soon.

“If he wants to make a great career, he has to go to Europe soon. Then the technical director will decide his future, and I honestly think he will let him go because he is a great talent, a product of our youth sector and a player of which we are proud.

“Inter? Yes, I also know about Manchester United. These are things that came out. We also had an offer, even if not from Inter. But we didn’t let him go.

“I don’t know if and when it will happen, maybe in a year or between two. But what is certain is that the pressure on Busio is always greater, given the many clubs that are coming forward.”

The quotes above were naturally translated in Italian, so the reporter initially asked about Inter’s supposed interest. All the interesting twists that interpreting language can create makes it hard to know for certain what was said.

But he definitely states that United are interested in Busio.

As alluded to at the beginning of this article, we must consider how Burleson is clearly offering Busio around, but he even contradicts what he initially said about letting the player leave — although it’s unclear if the supposed offer came from Europe.

Check out Busio featuring in a Toyota Drive Time special on YouTube below: