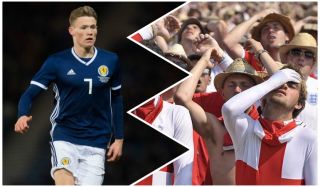 After fighting a media embargo, Stretty News can bring you an exclusive report on the international future of Scott McTominay.

A few weeks back, through a purple spell of form for United, we heard some whispers from those in the know about a potential court case regarding McTominay, but we dare not believe it at the time.

Through some fantastic journalistic sleuth work, I managed to speak with a high ranking English FA official, who cannot be named for legal reasons, in respect to this rumour, and he, let’s refer to him as Clarkey, revealed that the FA had approached FIFA in respect to McTominay’s international representation of Scotland.

“We didn’t think much of Scott when he played under Mourinho. He was playing as a centre half and, well, being used as a pawn in the Portugueezer’s game against the tyrannical Glazers right grip on the purse strings at United. When he declared for Scotland, some went as far as to smirk while sipping on their tea and crumpets. It was amusing to us, the Northern crowd taking on this non centre half and being chuffed about it”, said Clarkey.

“We didn’t even approach Scott about playing for the Three Lions at the time. But as the season went on, we slowly started to realise our mistake. It was during a recent game against Unai Emery’s Arsenal, when McTominay stuck a worldy into the top bin, we finally stood up and in unison with the Stretford End, we unknowingly started to sing ‘du du du duuuuuu Scott McTominaaaaay’ to our surprise!”

I pushed further on this and it was then he made the most amazing revelation!

“We have approached FIFA, through our legal representatives, and we have lodged a complaint against the Scottish FA for poaching a true Englishman from under our noses, who has turned into an absolute baller, and we are demanding his international future is reinstated with upon our chariot. We’re quite confident in this coming to fruition and intend to announce shorty.”

In a really crafty way, English boss Gareth Southgate has taken the focus off this to stop it coming to light by utterly shafting Raheen Sterling, who nobody really likes as he runs like a girl, and has accused him of cat scratching Joe Gomez.

The scouse victim had, in fact, cut himself shaving, but for the sake of the nation, Sterling and Gomez played along, to try get a decent midfielder into the ranks in McTominay.