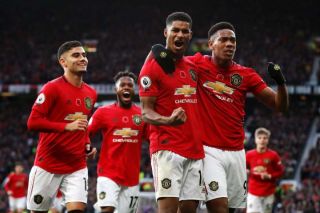 Marcus Rashford has revealed a note written when he was a child outlining his objectives as a kid to become a professional footballer for Manchester United.

Not many 22-year-olds can say they’re a key player for one of the biggest clubs in the world. That’s something Rashford has done enough to claim but he still has lots of developing to do before he can be considered a great at Old Trafford.

The Wythenshawe-born forward took to Twitter to share a note he had written as a youngster, showing his ambition as a kid to become a professional footballer for his hometown club.

My mum just dug this out… my attempt from when I was younger!

Keep working hard and you can achieve whatever you want 👊🏿 x MR pic.twitter.com/XhGyOj4GeW

The note reads: ‘I hope my future is very bright in and out of school especially in my career as a footballer.

‘I want to have a different lifestyle and make my family and others proud of me.

‘I only have one aim in life and that is to be a professional footballer, and hopefully at Manchester United.’

Rashford has made 187 appearances for United, scoring 54 goals and providing 29 assists during that time. He has certainly achieved his childhood aims — but now his objective should be to become a legend for club and country.

The Manchester United youth team graduate scored for the Three Lions last night as Gareth Southgate’s men ran out 7-0 winners against Montenegro in a Euro 2020 qualifier. That was Rashford’s 37th cap for England — scoring 9 goals since his senior international debut against Australia in 2016.

Moreover, the note in question also revealed a young Rashford’s thoughts on his journey so fart as a youth player at Carrington.

‘My journey so far has been amazing,’ it read. ‘I have experienced a lot of things associated with Manchester United and with school.

‘Thank you everyone and especially to those who have helped me on this breathtaking journey. I promise that I will work my hardest and I will try my best to become a professional footballer.’

Rashford can be proud of what he has achieved thus far but he needs to push for more and become a bloodthirsty threat in front of goal. Eight goals in his last nine appearances for club and country isn’t a bad feat.