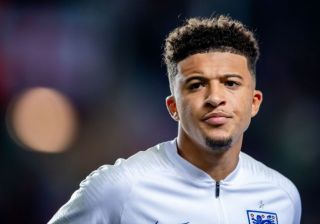 Like any Liverpool man would do, and vice versa, to prevent their rival from landing a top player.

Chelsea are also said to be interested in the Borussia Dortmund sensation, but it remains to be seen who would stand the best chance of tempting the 19-year-old. The Blues are still restricting due to their transfer ban, too.

Sancho hasn’t had the greatest of starts to the season though. Nicol believes joining a struggling side like United would not be wise.

“I think he’s crazy if he goes to Man United,” the Scot told ESPN FC (via Goal).

“We’re talking about he’s struggling in a team that’s struggling [Dortmund] — Man United are going to be struggling for a couple of seasons, so I would stay away from there.”

Nicol would prefer Sancho to join Premier League leaders Liverpool, but admits the player would have to accept a lesser role than Mohamed Salah and Sadio Mane.

“Well, if I was advising him, let me put it this way, I would like to seen him at Liverpool.

“I think he would be fantastic . If he could get his head round playing second fiddle to Mane and Salah, then that would be huge for Liverpool in my opinion.

“They could save the legs of both of those two and kind of swap the three of them in and out, but he’s not going to do that, he’s going to go somewhere to play. So I think Liverpool’s out.”

Nicol seems oblivious to the fact Liverpool aren’t always going to have Mane and Salah, and I wouldn’t be surprised if Real Madrid or someone came in for the former this summer.

United are trying to build something and amend their wrongs. Sancho could be sold by that if he buys into what Ole Gunnar Solskjaer is trying to do, which is to bring the best homegrown players together at Old Trafford. He fits that description as do many of his England teammates.