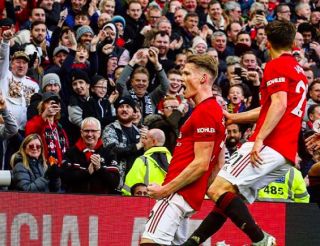 Scott McTominay has posted an update for Manchester United fans after he was brought off injured in Sunday’s victory against Brighton at Old Trafford.

The Scottish midfielder looked in pain as he was forced off in the final moments, with Ole Gunnar Solskjaer later confirming that he had rolled over on his ankle.

McTominay had been a doubt for the game on Sunday after picking up a knock in the Europa League win against Partizan Belgrade just three days earlier.

Solskjaer has become reliant on the 22-year-old as a central figure in the United side and he has been instrumental in the Reds winning five out of their last six games before the international break.

His injury will be a real worry for the United boss, who is still without Paul Pogba who is also sidelined with an ankle problem.

McTominay also acknowledged the second goal in the game against Brighton which he was eventually awarded after it was initially given as an own goal for Davy Propper.

We hope the youngster can have a speedy recovery and return for crucial games against Tottenham and Manchester City after the international break.

See his message to fans below: