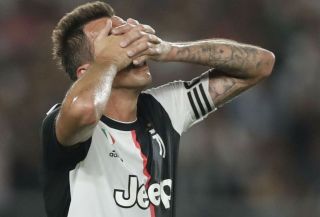 Mario Mandzukic is reportedly keen to join up with the Manchester United squad in December, a month prior to the winter transfer window.

The 33-year-old striker has been frozen out by Juventus manager Maurizio Sarri and has yet to play a minute of football under the Italian and ex-Chelsea boss.

Having been left out of Juve’s Champions League squad at the beginning of the season, the manager’s intentions were clear, but Mandzukic didn’t get a move away from Turin in the summer and is likely to leave after the New Year.

A January exit would suit all parties — Juventus, Mandzukic, and let’s not forget United.

While the return of Anthony Martial has seen United improve in front of goal in recent weeks, we’re still short in the goalscoring department. We have now come to the conclusion that Marcus Rashford is better drifting in from the flank and Mason Greenwood is still very raw.

READ MORE: RB Leipzig boss may tell Timo Werner to leave if it is in his best interests with Man Utd chasing striker

Ideally, United will have four strikers at any given time, and Mandzukic is still a good option to call upon even if it’s a short-term signing.

According to Goal Italy, cited by Caught Offside, the former Bayern Munich and Atletico Madrid forward has been heavily linked with a switch to Old Trafford, with a €5m transfer fee being touted to prise him away from the Serie A champions as negotiations are said to already be underway.

Moreover, it’s now suggested that Mandzukic wants to leave Juve in December to go and start training with Ole Gunnar Solskjaer and his squad ahead of his move becoming official in January.

That would make perfect sense for all involved and it shows good intent on Mandzukic’s behalf. He hasn’t played any football this season and will take some time to come to terms with the English game.

It’s added that ex-Liverpool midfielder Emre Can and Paul Pogba could also become involved in talks between the two clubs, but for now, the focus is on Mandzukic.

This is definitely one to watch out for in January – but it shouldn’t put United out of the market for strikers.

A long-term solution will be required next summer and yesterday we took a look at RB Leipzig’s Timo Werner. The Germany international looks the real deal, as does RB Salzburg’s Erling Haaland.