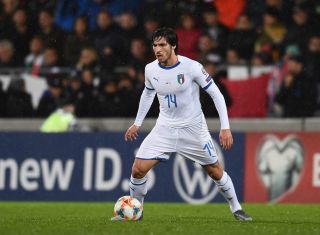 Sandro Tonali has distanced himself from speculation linking him with a move away from Brescia, amid claims Manchester United are monitoring the Italian midfielder.

The 19-year-old has also shrugged off comparisons to Italian football legend Andrea Pirlo.

While he is building a reputation for himself in Serie A, there is a lot to be said about the hype surrounding Tonali, and nowadays it can be built up to a point that disappointment is inevitable with inflated transfer fees.

The media has linked Tonali with a number of clubs as well as United. Borussia Dortmund and Atletico Madrid to name a few, but Brescia owner Massimo Cellino has since slapped a €300m price tag on the emerging star.

Currently on international duty with the Italy squad, Tonali has spoken about his future for the first time.

“I love President Cellino very much and he rates me highly,” Tonali told Rai Sport via Goal.com. “He’s a great person and I hope to travel down a good road with him.

“After the match against Fiorentina, he said he wouldn’t even sell me for €300m, but that doesn’t scare me, even if it really is a lot of money.

“I’m confident about what we’ll do this season. For now I’m not thinking about the market, I just want to help Brescia stay up.”

According to Sports Mole, the Red Devils haven’t been put off by the ridiculous price-tag set by Brecia and remain seriously interested in Tonali.

Solskjaer’s transfer policy so far has been to sign emerging young talent so it makes sense that Tonali is on his long wish-list.

Tonali came off the bench to make his international debut for Italy in their 5-0 hammering of Liechtenstein in a Euro 2020 qualifier on October 15.

The midfield ace has been compared to Andrea Pirlo in the past, probably because Pirlo also started his career at Brescia, but he has played down the comparison, instead naming another former Italy midfielder as his idol.

“Being compared to Pirlo doesn’t bother me, but I think we’re very different because he had indescribable technique and quality,” he added.

“I consider myself to be like [Gennaro] Gattuso but more technical. He’s always been my role model.”

And he’s not a bad role model to have!

Whenever we’ve seen Tonali in action, he looks a lot more combative than, say, Pirlo. Perhaps a comparison to Gattuso is more fitting.