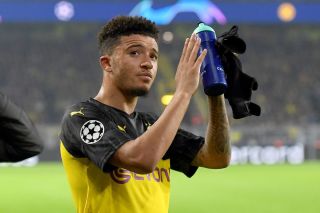 Sancho is set to take Raheem Sterling’s place in the England team for Thursday’s Euro 2020 qualifying clash against Montenegro. The Man City star was dropped for tonight’s game after an altercation with Liverpool defender Joe Gomez at the pre-match training camp, following last weekend’s Premier League showdown between the two title contenders, and now the Borussia Dortmund sensation has another chance to shine on the international stage.

The 19-year-old is a long-term target for United, while we can expect Liverpool and others to be sniffing around come the summer. The Mirror linked Sancho to Old Trafford last month, claiming that the club were willing to pay £100m to sign him.

Don Balon reported some days back that Liverpool were the favourites to land him but will have to pay €150m, while Diario Madridsta claimed that Real Madrid have a good chance of signing him because of their relations with BVB.

And now it has emerged Sancho is ready to leave Dortmund after an unhappy few weeks at the Bundesliga club.

Well, that’s if you believe a Daily Mail report claiming the former Man City youth team player has been left unsettled by developments this season. BVB are said to have already begun preparations to sign a replacement for Sancho as they prepare fort a £100m transfer battle.

He became a key player for the German outfit after leaving City in 2017 in search of first-team football. Not only did he achieve that, Sancho has become one of the most-wanted attacking players in Europe.

Sancho was left out of his club’s squad for their 1-0 win over Bundesliga leaders Borussia Mönchengladbach last month having returned late from International duty with England. Then he was hauled off after just 36 minutes of his side’s 4-0 defeat to rivals Bayern Munich at the weekend.

Now is the time for United to capitalise on Sancho’s problems in Germany!

The Red Devils need to strengthen their attack next summer, having had to rely on Daniel James and Mason Greenwood more than Ole Gunnar Solskjaer would have wanted to following injuries to Marcus Rashford and Anthony Martial.