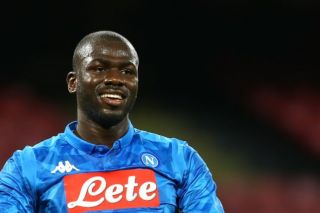 Serie A giants Napoli are in complete turmoil with the relationship between club president Aurelio De Laurentiis and his star players at breaking point.

A report in the Daily Mail claims De Laurentiis may be prepared to have a ‘fire sale’ of his key assets including Lorenzo Insigne, Kalidou Koulibaly and Allan.

Each player is unhappy with their situation in Naples; a host of top European clubs will be on alert looking to capitalise on the mess.

Kalidou Koulibaly is a player that has been linked with a move to Manchester United in several transfer windows now but Napoli have maintained that he is not for sale.

But with Napoli’s players becoming increasingly disillusioned with the direction the club is heading in under their president, it may be the perfect opportunity for United to capitalise.

The 28-year-old has established himself as one of the elite central defenders across Europe in recent years. Kouilbaly boasts physicality, pace, a great reading of the game and composure when playing out from the back. He really is the complete defender.

Many will turn to the fact that United have already spent big money on a centre-half this summer, breaking the world-record transfer fee for a defender with the addition of Harry Maguire.

But under Ole Gunnar Solskjaer, the Reds are trying to build a team that can compete and it’s not often a player of Koulibaly’s quality becomes available on the market.

Maguire has built a steady partnership with Victor Lindelof since arriving at the club, but Koulibaly provides the physicality and aerial dominance that the Swede is lacking.

Koulibaly could complement Maguire brilliantly at the back as he has the recovery speed that can sometimes let the English international down when a mistake is made.

While the arrival of Koulibaly could stem the development of Axel Tuanzebe, there would still be plenty of opportunities for the youngster to get game time and learning from one of the world’s best would only enhance his ability.

The Senegalese international is valued at £60m in the Mail’s report, which is a reasonable price given his pedigree. Solskjaer would be foolish not to at least consider the defender even if he does not fit the current recruitment mould of young, British talent.