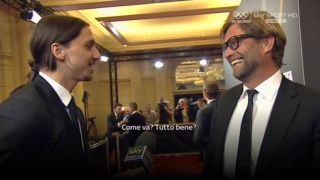 Liverpool manager Jurgen Klopp has joked that he’d consider signing Zlatan Ibrahimovic on a free transfer if the Swede hadn’t once been a Manchester United star.

The striker has just parted ways with LA Galaxy, but has vowed to his fans that “the story continues” with AC Milan and Bologna among the clubs said to be interested, according to Sky in Italy.

Michael Owen is the last player to have represented both United and Liverpool as a player, and nowadays he is rejected by most fans on Merseyside where he made a name for himself in the football world.

Ibrahimovic, 38, is without question one of the best footballers the world has seen in the past two decades, will soon be open to joining any club on a free.

“If he had not played for Manchester United before, then we might have considered him,” Klopp told Sportbladet via the Liverpool Echo, before suggesting the intensity Liverpool play with would be a little too much for Ibrahimovic.

“No, but I’m not even sure he wanted to play here. We’re a pretty intense team.

“With that said, I couldn’t have had more respect for Zlatan. I love his whole career, love his efforts, love his confidence.

“While it may not always be right, it is entertaining anyway. He’s a fantastic character and I really hope he doesn’t stop playing football. The world will miss him too much.”

Klopp’s comments come with a humourous tone, but he’s right when he says the world will miss Ibrahimovic when he retires from playing football.

And there’s no point arguing a striker like Ibrahimovic would suit Liverpool’s high press. He’d still score goals but there are more suited options out there.

I’ll always say it’s a shame he didn’t come to United earlier in his career. A true star, a leader of men, in a world of his own.