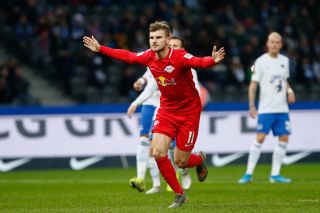 Timo Werner’s stock has continued to rise over the years and now he seems to be an attraction for Manchester United with Ole Gunnar Solskjaer seeking a striker in the transfer market.

Now 23, the Germany international is renowned as one of the most-wanted strikers in Europe. In 130 appearances for RB Leipzig he has scored an impressive 76 goals — a haul that should put him on United’s radar.

Werner is playing in a decent side too. Leipzig are currently placed second in the Bundesliga standings — 4 points adrift of leaders Borussia Möchengladbach — but are priced at 7/1 to win the league outright through this Ladbrokes promo code and there’s value in that bet considering the blip Bayern Munich are facing at the moment. The Bavarians, third and level on points with Leipzig, are still favourites to lift the title at 4/11 though, but with a goalscorer like Robert Lewandowski a turnaround is always possible.

Meanwhile, the Old Trafford outfit are said to be investigating the player’s £27m buyout clause, as reported by the Guardian, and now there’s proof a club with significant pull power like United will hold an advantage when it comes to signing Werner from the German side.

Kicker also claims his new contract includes a release clause — amount to €30 million — which probably explains his change of heart when it came to penning the new deal as any top club would be able to afford that. You can bet your bottom dollar Bayern Munich will be sniffing around…

Timo Werner now is the top earner at #RBLeipzig according to kicker. The magazine also writes that his exit clause is €30m and not the €60m that Bild reported. #Bayern, in the meantime, were sure that they would land him on a free transfer next summer according to kicker.

The proof is here with RB Leipzig manager Julian Nagelsmann insisting he’d tell Werner to leave the Bundesliga club if he thought they were holding back his development, although the well-respected coach doesn’t believe the time is right for his striker to depart the Red Bull Stadium.

“I’ve already advised many players to rake off their wedding ring with their current club to move somewhere else,” Nagelsmann told Sport Bild, as quoted by Goal.

“I’d do the same with Timo Werner if he were developing faster than the team at RB Leipzig.”

It makes total sense for United to monitor the German striker, considering the club’s recent problems in front of goal.

In his first season at Leipzig, Werner scored 21 goals in the league. While his goals have reduced in the seasons that followed, his overall goal contributions have increased which suggests he has developed his game and become a greater team player.

While there’s plenty of controversy surrounding the moneybag club from East Germany, they’ve maintained consistency in quality managerial appointments. From Ralph Hasenhuttl and Ralf Rangnick to Nagelsmann today, their teams have adopted different brands of attractive attacking football which compliments a forward player like Werner.

And that is what United need. A true goalscorer, someone to put fear in every opponent they face.

Is Werner the right man?

His pace and movement would compliment Solskjaer’s counter-attacking football nicely. The type of football we saw United play with in games against teams like Chelsea, Liverpool and Arsenal this season.

But a problem for United is breaking teams down that approach games with a low block. That’s where a striker with goalscoring intelligence is needed. Someone who can hold and link up play, but can score scruffy goals when chances are few and far between.

There are few strikers out there that excite me as much as Werner, with the exception of Erling Braut Haaland, and United should definitely be in the hunt for his signature next summer.