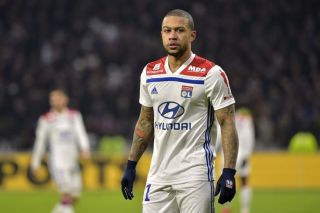 Manchester United have an advantage over other teams when it comes to signing Memphis Depay.

Lyon sporting director Juninho has confirmed that the Red Devils have priority access to re-signing the Netherlands international.

Depay left Old Trafford in January 2017 after 18 difficult months in England. He never quite settled or was able to replicate the form that put him on United’s radar back when he’d tear up the Eredivisie with PSV Eindhoven.

But a move to Ligue 1 helped Depay rediscover his mojo and he has scored 11 times in 14 matches with Lyon this season, including four in four in the Champions League. And his overall statistics since joining OL are not too shabby either (50 goals and 42 assists in 130 appearances).

Performing in Europe’s biggest competition is likely to bring suitors Depay’s way and Tottenham have been linked with a potential £50 million deal, as reported by the Daily Mirror, but Juninho has confirmed that United have a first option on the 25-year-old.

“It’s true that Manchester United have a priority to buy back Memphis,” the Brazilian told OLTV. “These things exist in football. But until now, we’ve not received anything on Memphis.”

Depay’s current deal is up in 2021 and Lyon might struggle to get an extension signed in the face of such interest.

United are also linked with a move to Lyon forward Moussa Dembele.

The French striker could fix one of the biggest problems facing Ole Gunnar Solskjaer’s side.

In recent weeks — since Anthony Martial’s return from injury —United have been better in front of goal but they still need goalscorer who is thirsty for goals.

Time will tell but I wouldn’t be rushing to bring Depay back.