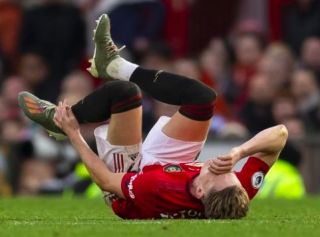 Manchester United midfielder Scott McTominay will be out of action for up to four weeks after initial scans on the ankle injury he suffered against Brighton, according to reports.

As reported by the Daily Mirror, McTominay could miss games against Sheffield United, Manchester City, Tottenham Hotspur, Astana and Aston Villa with the injury.

The Scottish international had to be taken off in the closing stages of United’s win over Brighton at Old Trafford on Sunday and looked in pain as he hobbled off the pitch.

He had initially been a doubt for Sunday’s game after being forced off injured in the Europa League game against Partizan Belgrade just three days earlier.

And it now looks like United’s worst fears have now been realised with McTominay set to miss a series of significant fixtures.

The report claims the severity of the swelling in the midfielder’s ankle means he will require another scan in the next 72 hours.

Ole Gunnar Solskjaer has relied on the 22-year-old to play a key role this season and he has emerged as the dominant force in midfield in the absence of Paul Pogba.

McTominay was just beginning to strike a partnership with Fred in central midfield and the injury comes as a huge blow for Solskjaer with United beginning to create momentum with the youngster in the team.

Solskjaer will now have to look to youngster James Garner or the more experienced figure of Nemanja Matic to take the place of McTominay in the side.