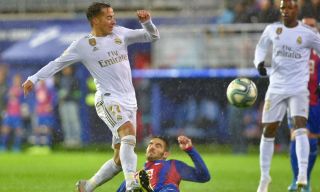 Every summer Man Utd get linked with hundreds of players. Not only are some reports guess work and complete rubbish, but you can be sure that some genuine targets never make the media.

According to journalist Fernando Burgos, Manchester United failed in their attempts to sign Real Madrid forward Lucas Vázquez this summer.

Solskjaer will argue that the club is going through an overhaul under his management. The squad requires a lot of work and Solskjaer is looking to get rid of high earners to bring in younger players for the future.

But that doesn’t add up with claims United were interested in Real Madrid’s Vázquez.

The 28-year-old isn’t exactly part of the next generation and would demand big wages to switch from the Bernabeu to Old Trafford.

Speaking on Onda Cero’s El Transistor show, cited by Sport Witness, Burgos claimed that United made a bid to sign Vázquez this summer.

Obviously, the Reds were unsuccessful in their alleged attempts to get a deal done, with the journalist stating Vázquez was not interested in leaving Real Madrid.

It’s clear from the football we’ve seen under Solskjaer since last December that he wants his front three to be quick, especially on the counter-attacker, and that’s definitely something Vázquez would bring to the table.

That said, Daniel James’ arrival from Swansea City has been an overwhelming one. The Welsh winger has hit the ground running and he too can play up front if needed — as seen last season in the Championship.

And to James’ credit, the 22-year-old has quickly become a favourite amongst United fans, buzzing to see a player raise his game for the top flight after a difficult summer which saw his father pass away. You can see how much it means to him every time he scores, and Solskjaer has been adamant about signing players with the right mentality.

Vázquez doesn’t seem to be in Zinedine Zidane’s good books this season and would probably jump at the chance of joining United if the opportunity came (again?).