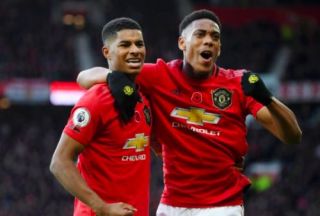 France manager Didier Deschamps says Manchester United striker Anthony Martial is one the players ‘likely to be called up’ after again being overlooked ahead of the international break.

Martial has been excellent for the Reds this season and his impact on Ole Gunnar Solskjaer’s side was highlighted when he was sidelined for eight weeks through injury.

United look far less threatening in Martial’s absence and the 23-year-old has become the focal point of the attack upon his return.

NEXT:Daniel James: We could have scored ‘seven or eight’ goals against Brighton

Ahead of upcoming Euro 2020 qualifiers against Albania and Moldova, Deschamps spoke about Martial, revealing that he is still in his thoughts for the national side.

“He was part of the French team on a regular basis, but recently he was often injured,” Deschamps said, as quoted by Manchester Evening News.

“He came back not so long ago and it’s going well in his role as a central striker with Manchester United. For a long time he’s been part of the players likely to be called up.”

It certainly is going well in a central striker role for Martial and it’s difficult to understand why he still wasn’t called up to his national side for the latest round of international fixtures.

Martial is pivotal to United providing any danger to opposition defences and was central to all of United’s good link-up play in the dominant performance against Brighton on Sunday.

He has scored 3 goals and contributed 3 assists in 6 Premier League games this season and Solskjaer will be pleased that he will get a full fortnight’s rest before the tough test away to Sheffield United coming up after the international break.

Anthony Martial in the Premier League this season:

Marcus Rashford in the Premier League this season: