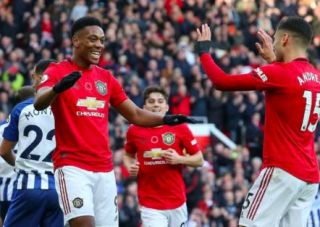 Daniel James says Anthony Martial has given Manchester United a focal point after his return from injury.

Ole Gunnar Solskjaer’s side suffered in the Frenchman’s eight-week absence when he was sidelined through a thigh injury, but have won five out of their last six games upon his return.

Martial has scored in each of his last two games, including his special solo goal  against Partizan Belgrade in the Europa League.

The 23-year-old has been in exceptional form in the central striker position and United look far more threatening when he is leading the line as opposed to Marcus Rashford who is more dangerous coming from the left-wing.

James, who had one of his best games for the Reds so far in the dominant victory over Brighton on Sunday, discussed the importance of Martial in this United side.

“Since he’s come back in, we’ve got that focal point,” the Welshman said as quoted by the Metro.

“He’s a great link-up player. He can come short or go in behind. It’s been important for me and for Marcus since he’s come back into the team to get that interlink.

“Since he’s come back, he’s got goals and he’s got assists and he’s been great for us.”

The Reds have jumped to seventh in the table after their 3-1 victory on Sunday and face fifth placed Sheffield United at Bramall Lane after the international break which promises to be a tough encounter against Chris Wilder’s side.

However, Solskjaer’s men should go into the game with confidence, and with Martial, James and Rashford, United are threatening enough in attack to cause big problems for the Blades’ defence.