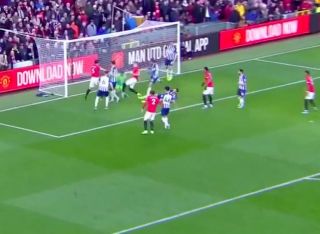 Manchester United have doubled their lead against Brighton through an own goal by Davy Propper.

Scott McTominay had a significant hand in the goal as he looked to bundle the ball over the line from close range following Harry Maguire’s knockdown.

The midfielder was a doubt for today’s game after hobbling off injured against Partizan Belgrade in midweek, but there’s no signs of a knock today as the Scottish international helped Solskjaer’s men gain a comfortable lead.

Inevitably, the goal went to VAR review, and it eventually stood after captain Maguire was deemed to have not handled the ball in the lead up.

United climb seven places in the Premier League with victory today and look in prime position to bounce back from last weekend’s defeat at Bournemouth.

Click here to see United’s second goal of the first-half.