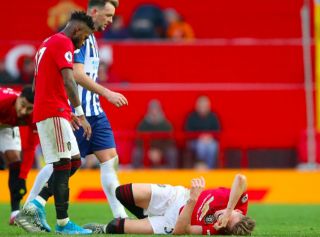 Ole Gunnar Solskjaer is sweating on the fitness of Scott McTominay after the midfielder was forced off injured in the closing stages of Manchester United’s victory over Brighton.

McTominay was a doubt for today’s game after hobbling off injured in Thursday night’s Europa League game against Partizan Belgrade but was cleared to play.

The 22-year-old was again impressive alongside Fred in midfield and had a hand in United’s second goal which came from a scramble inside the box.

Solskjaer has become reliant on McTominay as an essential part of his midfield in Paul Pogba’s absence and the youngster has began to develop a partnership with Fred.

But there will now be huge concern amongst fans about his fitness with Solskjaer confirming in his post-match press conference that he went over on his ankle.

We hope McTominay can recover for the game away to be Sheffield United in a fortnight but Solskjaer may have to turn to Nemanja Matic if he does not recover.

See what Solskjaer had to say as quoted by BBC journalist Simon Stone below:

OGS confirms McTominay will have a scan tomorrow. "Over on his ankle. Painful one. I had one and was out for eight weeks. Could be out for two. We will see."