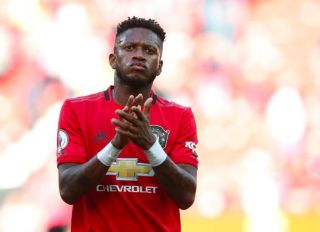 Ole Gunnar Solskjaer is finally starting to reap the rewards of giving Fred a consistent run in the team.

The Brazilian midfielder arguably had his best performance in a Manchester United shirt in today’s 3-1 victory over Graham Potter’s Brighton at Old Trafford.

Unlike what he have often seen from Fred so far since his move from Shaktar Donestk, he looked confident on the ball and was always positive in possession.

Fred is now establishing a partnership with Scott McTominay in the centre of the park which is encouraging given Solskjaer has so few options to choose from in midfield.

United fans won’t get too carried away with what was an impressive performance from Fred as we have seen glimpses of what he is capable of in the past and it is now time for a consistent run of good games after the international break.

Solskjaer’s men have jumped seven places to seventh in the table following today’s win and will go into the international break on a high before what promises to be a tough test in a fortnight’s time away to Sheffield United.

We played a little more positive

Young may struggle to get back in the side

Atmosphere for a home game continues to get better #mufc

One of the best performances from Utd in a long time today. Fred’s best game in the shirt, going forward at every opportunity. Brandon Williams should keep Ashley Young our the side forever now too #mufc

Fred looked great today. Dan James solid again. Rashford… glad he got a goal. Good thing we didn’t need the 2 that got away.

With Fred and McTominay combination.. I think this is the best time for @paulpogba to play the num 10 role with Andrea on the bench.#MUFC #MUNBHA

Good to see Fred performing and enjoying his football at United. Tidy on the ball, defensively aggressive and so composed today. Had his best game in a United shirt and has impressed in previous games too, deserves a lot of credit for stepping up. #mufc pic.twitter.com/qwg9c267ow