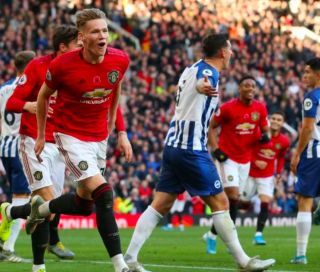 There is some concerning news for Manchester United as Scott McTominay sustained an injury and was brought off in the closing minutes against Brighton at Old Trafford.

McTominay has emerged as one of the key members of Ole Gunnar Solskjaer’s squad this season and a serious injury would dampen what has been a positive day for the Reds.

United won 3-1 against Graham Potter’s side, lifting them to seventh in the league after starting the game in 14th position.

McTominay was a doubt for today’s game after hobbling off injured against Partizan Belgrade in the Europa League in midweek, but seemed fully fit up until he picked up his knock late on.

As reported by Manchester Evening News journalist Samuel Luckhurst below, the Scottish international looked in pain as he left the field.

We hope McTominay’s injury isn’t too serious and he can return for the game against Sheffield United after the international break.

McTominay carried off in added time by #mufc doctor and physio. Looks in pain and getting treatment down below us.