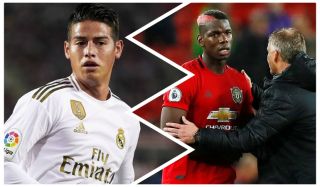 The Man Utd midfielder has been long linked with a move to Madrid but it didn’t happen in the summer while it seems inevitable that he will leave in the future.

Manchester United will stand firm on their valuation for Pogba, whatever it is, as he is the club’s most prized asset.

The former AS Monaco playmaker has struggled during his time at the Bernabeu — and even spent two seasons on loan at Bayern Munich.

However, a deal is not likely to happen in January. United will only have Pogba back fit in December and Ole Gunnar Solskjaer won’t want his best player sold midway through the season. A challenging one at that!

I’m also unsure how United would react to an exchange offer including Rodriquez. He’s 28 and hasn’t been able to replicate his unbelievable form from the 2014 World Cup when he won the Golden Boot.

Arsenal and Chelsea are also said to be monitoring Rodriquez, as per The Sun, as are Serie A champions Juventus.

Personally, I’d give it a miss and focus on a more up and coming playmaker. Let us know what you think by voting on the poll below: