Man Utd have booked their place in the last-32 of the Europa League after beating Partizan Belgrade 3-0 at Old Trafford.

Goals from their front-three Mason Greenwood, Anthony Martial and Marcus Rashford gave Manchester United a convincing win, and fans got a taste of entertaining football which has been rare this season.

With the Europa League knockouts secured, Ole Gunnar Solskjaer’s side must now fix their domestic form before it’s too late. Finishing in the top four is not an impossible task yet but it’s definitely slipping away (10 points adrift) from us.

The BT Sport was tasked with picking his ideal United XI, as documented by Jake Humphrey:

Paul and Owen create their current preferred #ManUtd starting XI to give them success this season. pic.twitter.com/uoBPnIod5L

And here is what he came up with: De Gea; Wan-Bissaka, Tuanzebe, Maguire, Shaw; McTominay, Pogba; Greenwood, Rashford, James; Martial. 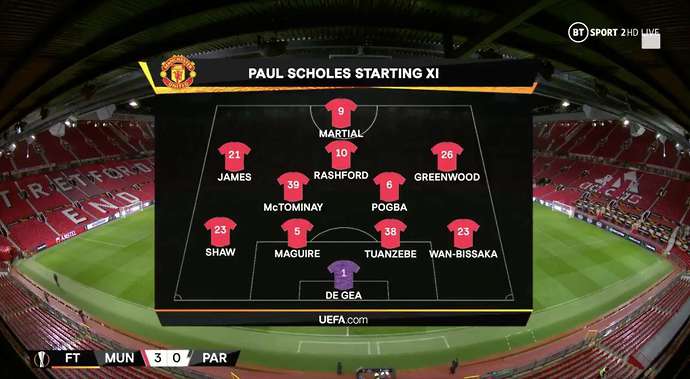 “The goalkeeper explains itself, he’s obviously one of the very best. I think the question mark in the back four is a partner for Maguire. I like the rest of it.

“I think he needs someone quick, someone strong, someone aggressive next to him. When Tuanzebe’s come into the team this season he’s looked like he could be.

“McTominay and Pogba in midfield, I think they could be good together. We’ve seen how good McTominay has been this year.

“I think those four up front excite me. I think there’s real pace.

“I think a question mark is against the number 10 area of the pitch. A player who can knit the team together, who can link the midfield and the forward players. Mata was good at that tonight, but in the long run I don’t think he’ll be the answer.”

Hargreaves: “I love Tuanzebe, he’s going to be fantastic.”

Owen Hargreaves named his Man Utd XI too — with a back-three — and he had no place for Daniel James!