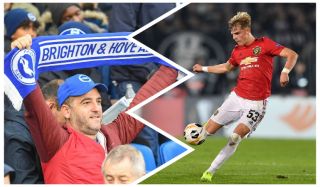 Manchester United’s progress up the Premier League table was halted by a tough loss against Bournemouth last week, as Ole Gunnar Solskjaer once again rued his side’s inability to muster enough attacking threat.

With United now sitting 10th in the Premier League table, and 10 points outside the top 4 after 11 matches, improvement is needed imminently to prevent United’s season from fading into mediocrity.

United’s relatively tame fixture list for November presents an opportunity for improvement, starting with the upcoming match against Brighton.

While Brighton may sit higher than United in the league table, there is no doubt that the players available to Solskjaer for this match, likely largely including the following, are enough to comfortably dispatch a side that flirted with relegation last season.

Expect de Gea between the sticks as usual for this week’s Premier League encounter. The Spanish international will be in search of a clean sheet given United’s struggles to earn one in the last three matches.

A staple in the United side after an excellent start to the season and his tenure at Old Trafford, Wan-Bissaka is expected to be at his usual best this weekend against Brighton. The English fullback, who joined from Crystal Palace this summer, should be working on his world class defensive ability in the attacking half of the pitch.

While Lindelof has not been at his best this season, he remains an important part of United’s build-up play, and showed enough last campaign to suggest that he is an integral member of Solskjaer’s setup. It would be a surprise to see him omitted this weekend.

Despite the massive transfer fee that brought Maguire to United this summer, he has slipped under the radar as one of the Red Devils’ best players this campaign. He adds much calmness and an element of leadership to United’s defence, and will command the back line this weekend against Brighton.

With Ashley Young suspended and Luke Shaw, now may finally be the chance for Brandon Williams to start a Premier League match. The 19-year-old has impressed in the Europa League and League Cup and has led many to believe he could be the club’s long-term solution at left-back.

The 23-year-old midfielder struggled against Bournemouth after a series of solid displays in prior Premier League matches. McTominay is expected to return to the development that has seen him become a staple in United’s midfield over recent months.

The Brazilian midfielder has hardly earned his spot in the centre of the park, but he remains the best option to deputize for Paul Pogba in the centre of the park. Steadily improving and settling into the side, Fred is yet to suggest that he could be a long-term option for United, but he will have a few more opportunities in upcoming weeks to do so.

James, when fit, infinitely improves the dynamic of United’s attack with his blistering pace and tactical intelligence; he has been directly involved in 38.4% of United’s 13 Premier League goals this season, as per WhoScored. The Welsh international is a shoo-in to start a crucial Premier League match this Sunday.

After Andreas Pereira and Jesse Lingard both failed to impress against Bournemouth, it seems only logical that United’s third option in attacking midfield, Juan Mata, will start against Brighton. Mata has failed to kick on after signing a new contract last summer, but remains an experienced asset and can link United’s midfield and attack with ease.

Scoring three in his last three appearances, Rashford has stepped up and added a few much-needed goals to United’s attack. While he failed to make the difference against Bournemouth, it was his excellent timed finish against Norwich and stunning free kick against Chelsea that secured wins for United. Solskjaer will be hoping for the same from his talisman against Brighton.

As Martial gears back into fitness and form, he reclaims the burden of being United’s x-factor, the unpredictable player who can make things happen in attack. More of the same link-up play that led to his neat goal against Norwich is much needed for a United side whose woes in attack threaten to define the 2019/20 campaign.