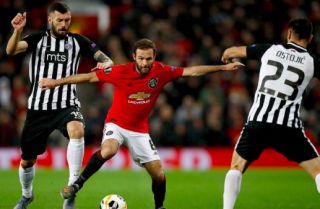 Juan Mata says ‘confidence is good’ in the Manchester United camp after the Reds cruised to a 3-0 victory over Partizan Belgrade at Old Trafford.

Ole Gunnar Solskjaer should be able to rotate his side for the remaining matches against Astana and AZ Alkmaar, allowing the Reds to prioritise climbing from 10th in the Premier League.

“We need a game like this, playing good football, scoring in the first half and enjoying ourselves, We did that for long periods and the fans are happy today and we have qualified,” Mata told BT Sport.

“We are doing OK in this competition, we have qualified which was the first objective but we want to be top. We want to keep escalating positions in the Premier League and are still alive in the other two cups.

“We have a squad with a mix of experience and young people coming through the academy. Some of them are having a lot of minutes, they are developing as players and people and we are very happy with them.

“It is always good to arrive at the next game with a win. The confidence is good, we enjoyed ourselves and we will try to replicate the good football in the Premier League.”

Mata had his best game of the season for the Reds in his favoured central position behind the striker.

The Spaniard has done enough to start ahead of Andreas Pereira in attacking midfield against Brighton at Old Trafford on Sunday after linking up play well with United’s dangerous young attackers. He was perhaps unfortunate to not have a goal himself with the Reds creating a host of opportunities to increase their lead in the second half.

Mata might not have the legs anymore but he’s infinitely more talented than Pereira and Lingard. Combined.