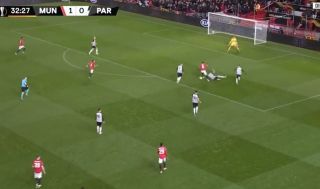 Anthony Martial has put Man Utd 2-0 up against Partizan Belgrade.

A sensational first touch lead to a mesmerising run through Partizan’s defenders before Martial struck with the right side of his foot.

Knowing where the goal was before he entered the box, the Frenchman slide the ball past the goalkeeper with ease.

You wonder why he doesn’t do this more often, but when Martial is in form he’s unplayable.

The assist came from Mason Greenwood, who opened United’s scoring with a composed finish, though he will be thankful for the touch which came off a Partizan defender.

Watch the goal below, as per BT Sport:

Anthony Martial that is special 🤩